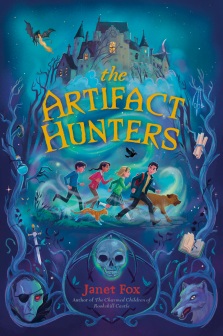 For fans of THE CHARMED CHILDREN OF ROOKSKILL CASTLE, who have asked for a sequel… from Viking Children’s, a companion book: THE ARTIFACT HUNTERS.

Isaac Wolf can travel through time. But he’s also in a race against it.

With tensions in Prague rising at the height of World War II, Isaac Wolf is forced to leave home with nothing more than a small backpack and a pendant in the shape of an eternity knot. His parents believe the pendant will keep him safe – if he can discover what it really means.

This clue leads him to Rookskill Castle, home of the Special Alternative Intelligence Unit where gifted children can learn to harness their powers to support the Allies’ cause. With the help of his new friends and an antique watch that allows him to travel through time, Isaac must unlock his own powers and uncover the true meaning of the eternity knot. The only way he can do that, though, is by hunting for a series of magical artifacts that are scattered throughout the past…and Isaac isn’t the only artifact hunter. Soon he finds himself in a race against a threat just as deadly as the war itself – one that his parents had been trying to shield him from all along.

“Potent, otherworldly, evil magic seeks domination, feeding on terror and upheaval in a time of war, while a Jewish refugee must find a way to counter it with some good magic of his own… Episodes are detailed and fast-paced, each one moving the tale forward, and there are lots of unexpected twists, turns, and revelations. Isaac and his magical teammates…are steadfast, brave, earnest, and altogether engaging. Inventive and exciting, with strong hints of more to follow.” Kirkus Reviews 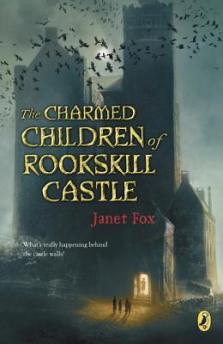 THE CHARMED CHILDREN OF ROOKSKILL CASTLE

“Keep calm and carry on.”

That’s what Katherine Bateson’s father told her, and that’s what she’s trying to do: when her father goes off to the war, when her mother sends Kat and her brother and sister away from London to escape the incessant bombing, even when the children arrive at Rookskill Castle, an ancient, crumbling manor on the misty Scottish highlands.

But it’s hard to keep calm in the strange castle that seems haunted by ghosts or worse. What’s making those terrifying screeches and groans at night? Why do the castle’s walls seem to have a mind of their own? And why do people seem to mysteriously appear and disappear?

Kat believes she knows the answer: Lady Eleanor, who rules Rookskill Castle, is harboring a Nazi spy. But when her classmates begin to vanish, one by one, Kat must uncover the truth about what the castle actually harbors—and who Lady Eleanor really is—before it’s too late.

Janet Fox is an author, mom, outdoor enthusiast, and former teacher. She’s been to the bottom of the ocean in a submersible, and had a brief fling with rock stardom. Her novels are written for children and young adults but have won her fans of all ages. Her most recent novel, THE CHARMED CHILDREN OF ROOKSKILL CASTLE, is a gothic middle grade fairy tale set in Scotland and has received a whole bunch of stars, and the lovely Crystal Kite Award. Janet is currently working on a companion novel to CCRC, tentatively titled THE WITCH’S WATCH. At the moment she’s sporting blue stripes in her hair. She lives in Bozeman, Montana. Find out more at www.janetsfox.com