I am super excited to welcome our very own Kat Shepherd to the blog!!! Her new book, THE PHANTOM HOUR, releases today!! I recently had a chance to chat with Kat about her new book, a brand new mystery series and much more.

Q: You have a passion for animals, traveling and the outdoors, among many other interests. How have those passions found their way into your writing?
A: Like any author, I pull a lot from my own life to put into the stories I write. Lots of my characters are based on former students of mine or other people I know, but there’s always a little bit of me in there, too. In the newest Babysitting Nightmares book, THE PHANTOM HOUR, Clio shares my passions for travel and history and glimpses into the past. And in Book 2 we’ll meet Ethan, who has a really strong connection with animals. I train and foster dogs, so I really wanted to put a character in the series that reflects my own bond with animals.
Because I write suspense, I rarely put pets in my scary books, and there’s a really good reason for this. Anytime I see a pet in a scary movie or book, it immediately distracts me, because I get so worried that something is going to happen to it. (I blame Stephen King for this. Animals rarely fared well in his books!) So I intentionally avoid putting pets in, because I don’t want my readers worrying about them like I always did. But in PHANTOM HOUR I couldn’t resist bringing back my favorite dog, Wesley. He passed away in 2013, and I miss him every single day, so it was wonderful to get to write about him and see him come alive on the page. It was a little like getting to spend time with him again.

Q: Tell me more about microphilanthropy. Does it ever crop up in your books? How can readers get involved?
A: It’s important to me that my protagonists be kind and show compassion and generosity. Not because I’m trying to teach some big lesson to kids or anything, but because I have to spend a lot of time with my characters, and I don’t really like to be around people that aren’t kind or compassionate. Generosity and compassion are driving forces in my life; they absolutely give my life direction and purpose. That’s not to say that I am this supremely generous and compassionate person, but those are the qualities I am continuously striving toward. Failing to get there a lot, but always trying.

One of the biggest challenges of my life was that I have always wanted to be this great philanthropist, but I don’t really have any money. So in trying to figure out how to give meaningfully when the size of your wallet doesn’t match the size of your heart, I started pursuing a concept I call microphilanthropy. It’s based on the idea that you don’t need a lot of money to make positive, measurable change in your community. You just need people.

Basically, it’s crowdfunding, but rooted in the community. I find local organizations that need small, concrete projects funded: a science club at the library, blankets for the zoo’s chimpanzees, emergency rental assistance to keep a family from becoming homeless. Each project costs anywhere from $100 to $1200. Then I throw a party and invite the organizations to come a pitch their projects to my party guests. Then everyone at the party puts whatever money they can spare into jars we set up for each project. At the end of the night we count up and distribute the money, and the organizations go on to fund their projects. The average donation about $10 or $20 per person, but when you pool that money together, it makes these incredible things happen.It creates a really strong connection between people and their communities, and it feels really powerful to see that you made something amazing happen. The best part is seeing the excitement on my guests’ faces when they realize that they are the reason the library has a science club now, or a family didn’t lose their home. It wasn’t some rich person who did that. It was us.

I actually just wrote up a little how-to guide for folks who want to throw their own microphilanthropy party. They can email me at my website katshepherd.com, and I’m happy to send it over or help them strategize.

Q: What should readers expect from Book 2?
A: While Book 1 of Babysitting Nightmares took the girls into the Nightmare Realm, Book 2, THE PHANTOM HOUR, feels a little more grounded in this world. Clio gets a job babysitting for the Lee family, a new family who has moved into an abandoned old mansion at the edge of town. The Lees are lovely, and Clio is thrilled to get the chance to explore the old mansion… until she starts to realize it may be haunted. Luckily Clio has help from her friends and Aunt Kawanna, and she also gets some unexpected help from her new friend, Ethan, who has a few secrets of his own. Readers should expect a spooky ride of suspense, thrills and chills as Clio works to unlock the mansion’s mysteries before it’s too late.

Q: Are any of the thrills and chills from BABYSITTING NIGHTMARES based on real-life experiences?
A: Several generations of women in my family have had regular contact with ghosts. Ethan’s Great-Grandma Moina is based on family stories, but I made her backstory a lot more exciting than my own family’s. For my own great-grandmother ghosts very matter-of-fact and not at all mysterious; they were just around all the time. It was much more fun to make Moina a glamorous, professional medium who performed big, showy seances! To figure out how to do that I did a lot of research on the Spiritualist movement and the history of psychic mediums in the US. I even went to a seance in an old Victorian mansion! What I learned was that there were lots and lots of seances back then, but not a whole lot of ghosts. The magician Harry Houdini helped prove that most of the so-called mediums were faking it and using tricks and illusions to fool people into thinking that they were seeing and talking to ghosts. I’m not sure if I was disappointed or relieved to learn that!

Like the house in PHANTOM HOUR, my own house was vacant before we moved into it. We are only the third owners, and the last person who lived there was a woman who had lived there for 40 years. After she died her daughter held onto the house for another decade because she couldn’t bear to give up something her mother had loved so much. So we felt a little worried when we moved in that might find her ghost hanging around.

A few months after we moved in I went to bed early and my husband was still awake. For some reason he always keeps his dress shoes on after work, and it can be annoyingly loud when he walks around the house. I was awakened by his footsteps in the middle of the night, and I was super irritated that he hadn’t taken off his shoes. But then I rolled over and my husband was asleep next to me! I woke him up, and we both heard a man’s footsteps walking through the house. Our burglar alarm had been set and our dogs were sleeping peacefully, so we knew it couldn’t be an actual person. For some reason nothing about it felt scary at all, and we just went back to sleep. Our house was built by a judge, and we wonder if it was his otherworldly footsteps we heard. So we did end up having a ghostly encounter, just not with the ghost that we expected!

Q: What advice do you have for young fans who may be interested in writing their own stories?
A: I think one of the best things writers can do is to read a lot. Reading helps give you an instinct for story and language; you learn by seeing how other people do it. I also think it helps to read critically, with the eye of a writer. Read for enjoyment, but then take a minute to think about why you loved the story and what made it so good. Then think about those moments that weren’t so good. Did the story drag? Were there parts you got bored, or the action moved too fast? Reading like a writer is a big part of how I developed my own storytelling style and voice.
The other big part of writing your own stories is to WRITE THEM! Put them in a notebook, get a cool journal, or learn to type and store them electronically. If you’re excited to write but feel stuck for ideas, sometimes fanfic is a really fun place to start. Think of your favorite book and write a sequel, or choose a character from a book you love and put them on a new adventure. Create a mashup of your two favorite series. What would happen if the characters met? Spooky stories are also a great way to get started, because it automatically puts your writer’s imagination into overdrive! I teach a spooky story writing workshop, and I’m always happy to email aspiring writers the ideas and exercises I use to get started.

Once you get your stories down on paper, make sure you share them! Writers need readers. Ask your friends and families to read your work and share any moments where they got confused or needed more description, as well as those parts that made them laugh or jump out of their seats. Take that feedback and use it to make your story really sing. Writing a first draft is important, but revising is where the magic really happens. Most writers I know absolutely love to revise, because it lets us forget all the nitty-gritty and just focus on making the story the best that it can be. 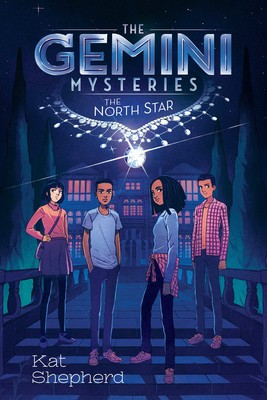 Q: What can readers expect next from Kat Shepherd? I hear you may have a new mystery series coming later this year?

A: I have a new mystery series The Gemini Mysteries, that debuts on March 5 with THE NORTH STAR. I have been a huge mystery fan for as long as I can remember; so much so, in fact, that I have a mystery-themed tattoo sleeve that continues to evolve as I add more favorites to it. One of the things I loved most about mysteries is the interactive experience of reading one. You’re constantly taking in information, evaluating, predicting, and then re-evaluating based on a changing landscape of clues. So exciting as a reader, and such a great tool as a teacher! This series is especially fun because there is a picture at the end of every chapter with a clue hidden in it, and the reader gets to work alongside the detectives to find the clues that lead to the next step in the mystery.

It’s been fun for me, because Babysitting Nightmares and Gemini Mysteries are so different, but there is a lot of crossover between mystery and horror. I like to write fast-paced adventures with a little bit of humor and lots of suspense, and I think both series allow me to do that. I hope my readers will have as much fun reading them as I have writing them!