Two of the Spooky Middle Grade authors had new novels published earlier this month, and they’re both within book series. Angie Smibert continues her GHOSTS OF ORDINARY OBJECTS series with the second book LINGERING ECHOES, and Kat Shepherd began the new GEMINI MYSTERIES series with book one, THE NORTH STAR. Writing a series has its own set of unique challenges from writing a stand-alone book, so I asked these two spooky authors to give us some insight into their process.

Angie, tell us about your GHOSTS OF ORDINARY OBJECTS series…

Angie Smibert: The series is a blend of history, mystery, folklore, and magical realism. Set in 1942 in a small coal mining community in Southwest Virginia, GHOSTS centers around Bone Phillips (12) and her family and friends. In the first book, BONE’S GIFT, she discovers she’s coming into her Gift, as her Mamaw calls it. Almost everyone in the Reed/Phillips family has some sort of ability. Bone finds she can, with a touch, see the stories—or ghosts—in ordinary objects. People leave emotional imprints on objects. In the first book, Bone is faced with many changes besides her Gift. Her best friend goes to work in the mines. Her father gets drafted. And she has to go live with her dreaded Aunt Mattie, who does not hold with the Gifts. All the while, Bone needs to learn to use her Gift in order to solve the mystery of what happened to her mother.

How does the story continue in this new book, LINGERING ECHOES?

Angie Smibert: In the new book, Bone is a bit more at ease with her Gift, or at least she’s getting there. This time Bone needs to use her Gift to solve the mystery behind a seemingly haunted or magical jelly jar. Her best friend Will—Silent Will Kincaid—inherited this jar along with his father’s dinner bucket from when he goes to work in the mines. One day, Will hears sounds coming out of the empty jar. In fact, it appears to capture sounds. Bone suspects solving the mystery of the jar might help her get to the bottom of why Will can’t talk. Oh, and this story happens at Halloween!

Oooh, extra spooky! Kat, can you tell us about THE GEMINI MYSTERIES 1: THE NORTH STAR?

Kat Shepherd: THE GEMINI MYSTERIES is an interactive mystery series that follows the adventures of four teenage sleuths. At the end of every chapter is a picture with a clue hidden in it. Each hidden clue leads the detectives onto the next stage of solving the mystery. In Book 1, THE NORTH STAR, twins Zach and Evie and their best friend, Vishal, are hanging out with the twins’ crime reporter mom when she gets a call that a priceless diamond necklace has been stolen just before a charity auction. The friends quickly find themselves right in the middle of a crime scene, and they discover there is no shortage of suspects of who want the necklace for themselves. With the help of new girl Sophia Boyd, the detectives are soon chasing down clues in a race against time to get the necklace back before it’s too late.

Wonderful! Kat, this is the first book in a series. What are the challenges and/or joys of writing a book that’s starting a series? 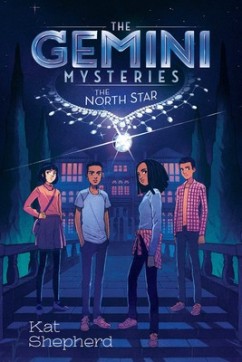 Kat Shepherd: One of the things I love about starting a new series is getting to build a world for the reader. I love the opportunity to create an immersive experience, figuring out the rules of the world and the intricacies of my characters. And then figuring out how to introduce the reader, deciding what they need to know right now and what can wait. The fun of a series is it’s a slow burn, so you don’t have to tell everyone everything in the first book. Not every question has to be answered. Some things you get to keep for yourself to reveal later.

The challenge of a new series is the other side of the coin. You’re starting from scratch. Everything is new. There’s no shorthand the way there is with later books in a series. You can’t take anything for granted. And you have to build something strong enough in that first book that a whole series can stand on it; you have to create something that makes your readers want to come back for more.

Yes, interesting. Angie, what made you want to write ghost stories?

Angie Smibert: This isn’t precisely a ghost story. (The next book, though, does have a ghost dog in it.) The ghosts that Bone sees are more memories that have left their marks on these objects. Bone loves stories—everything from folktales to movies—as long as they aren’t true. So, of course, I gave her a Gift that she’d hate, seeing real stories in objects. Eventually, she’ll learn that her Gift is to give voice to unheard stories.

But, that being said, I do love ghost stories! I can still remember when my fourth grade teacher told us about the ghost that haunted her childhood home in Alabama. It was the ghost of a young slave girl who’d been killed by her owner for revealing to the Union troops where the household silver was buried. The girl could still be seen walking down the grand stairs and out into yard. She’d disappear precisely where the treasure was buried. So that’s probably when I got hooked on ghost stories.

Wow! Cool story. Kat, we know you love spooky books, because your other series is BABYSITTING NIGHTMARES. How was it different writing this mystery series?

Kat Shepherd: There are lots of similarities between spooky books and mysteries. There are thrills, chills, and suspense in both. Suspense is what keeps the reader turning the pages. You want cliffhangers, you want surprises, you want peril, all that great stuff that keeps the story going. I think the biggest difference between them actually comes with the pre-writing. With spooky stories I have my concept and the basic plot mapped out. I know about where the setpieces will go and how the story will end, but a lot is left to be discovered as I write. I get to play a little, seeing how I can up the spookiness factor or what twists I can add to build suspense or atmosphere. But with mysteries I have to know everything in advance. This is especially true for the interactive mysteries, because every chapter has to lead to a hidden clue. That means I have to know in advance what every clue will be, and I have to know exactly how every scene will play out to lead the characters (and the readers) to the clue. For THE NORTH STAR, I had a 6,000 word outline and color-coded timeline for every major character before I wrote a single word of the story. Because of that, once I finally sat down to write the book, it went very quickly. I knew exactly what was going to happen, and my only job then was getting it down on paper and making it come to life on the page. 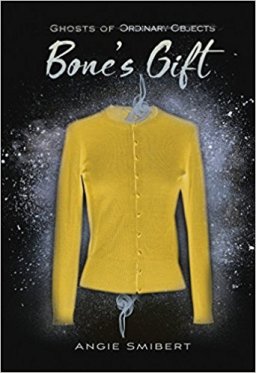 That pre-writing can really help. Angie, was it easier or harder to write this second book in the series and why?

Angie Smibert: In some ways, it’s easier because I’ve already established the setting and characters. I don’t need to really do additional world building. But then again, the second book is harder because I still have to introduce the world to new readers—without overdoing it for those who read the first book.

That’s a challenge! Kat, the third BABYSITTING NIGHTMARES is coming out in August, THE TWILIGHT CURSE, then another GEMINI MYSTERIES, THE CAT’S PAW, in December. How does your writing change when you’re working on the second and third books in a series?

Kat Shepherd: What’s challenging about follow-up books in a series is that essentially you have to follow that old Hollywood studio line: “Give me the same, but different.” Readers love series books because they’re familiar and comfortable; they follow certain patterns or have similar themes, and writing a series needs to give that to them but still make it feel fresh. So it’s always a challenge to decide what parts of the patterns to keep and what to change up. For example, in BABYSITTING NIGHTMARES, each book follows a different girl with a different spooky problem; that’s the different part. But other things need to stay consistent, like the rules of the world, the Big Bad in the background, and certain beats, like the girls meeting up for doughnuts and strategy sessions at Kawanna’s costume shop. I want to give readers those familiar beats so the series starts to feel like home to them. What’s really nice about writing second and third books in a series is that by this time you’ve really spent a lot of time with your characters, so you know them well and you know their world. You’ve seen them grow and develop and unfold, so writing the later books is like visiting old friends again. I hope they start to feel like old friends to readers, too!

Oh yes, good tips. Angie, will there be more books in the GHOSTS OF ORDINARY OBJECTS series? What can we look forward to from you?

Angie Smibert: Yes, there’s one more book in the series (so far), called THE TRUCE. I’m working on the revisions right now. Or I should be! Book 3 comes out next March. The story is set at Christmas and involves a body found in the mine, Uncle Ash, a German soldier, and a ghost dog.

Samantha M Clark is the author of THE BOY, THE BOAT, AND THE BEAST (Paula Wiseman Books/Simon & Schuster). A former journalist and editor and constant wonderer, she’s convinced she’ll one-day find the wardrobe that took the Pevensie’s to Narnia. Until then, she’s writing about her own magical worlds. Find out more about Samantha and her books at SamanthaMClark.com.