There’s one holiday that most of us associate with scary stories—and it doesn’t fall in December. In the US, at least, Halloween is the season for everything dark and strange and spooky. Meanwhile, the December holidays are all about coziness and comfort and light, whether that light comes from a row of burning candles or a twinkling tree.

And that’s our loss. After all, what could be cozier than sitting around a crackling fireplace while the wind howls outside, shivering over a great ghost story?

Early storytellers got this. The tradition of telling scary tales in winter goes back centuries, to ancient celebrations of the winter solstice. On the longest, darkest nights of the year, the divide between the realms of the living and the dead was believed to be especially thin. Clans gathered around Yule fires to share strange tales, letting light and warmth keep the icy dark at bay. (You can’t have firelight—or strings of glowing fairy lights stapled all over your house—without darkness, after all!)

The tradition survived through Shakespeare’s time—“A sad tale’s best for winter,” he wrote in The Winter’s Tale. “I have one. Of sprites and goblins.”—and had a boom in Victorian England, when writers like Elizabeth Gaskell and Algernon Blackwood penned wintery ghost tales, and Charles Dickens published what might be the most famous ghost story of all: A Christmas Carol. 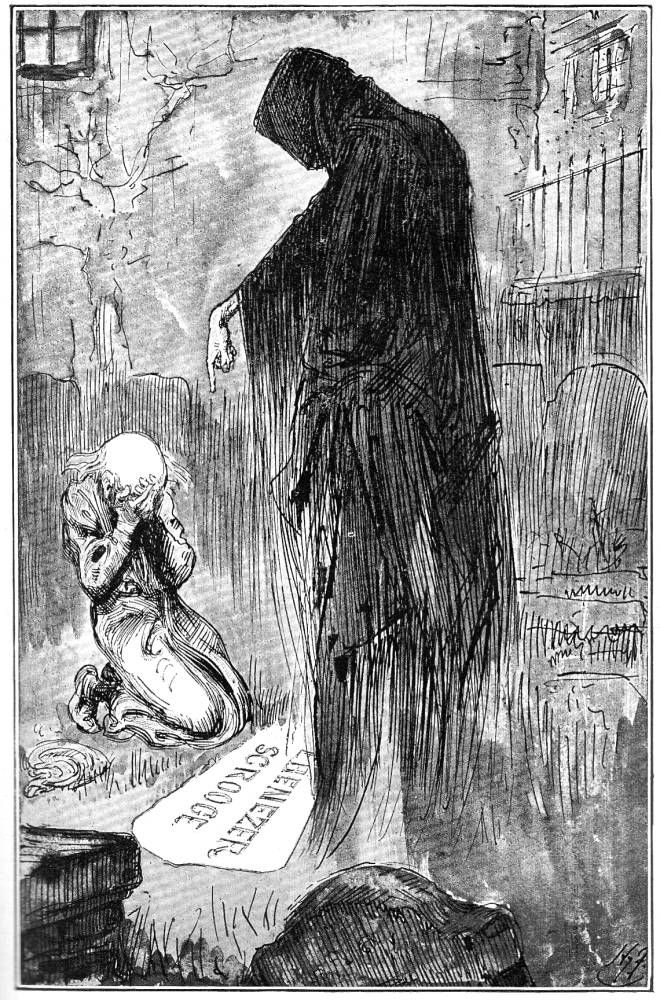 (“The Last of the Spirits,” by Harry Furniss)

So for everyone who’s ever listened to the lyrics of “It’s the Most Wonderful Time of the Year” (“There’ll be parties for hosting, marshmallows for toasting, and caroling out in the snow… There’ll be scary ghost stories and tales of the glories of Christmases long, long ago…”) and thought: Wait. What?—yes, the winter holidays are a perfect time for scary stories. Maybe it’s time for all of us creepy book lovers to bring the tradition back.

Want an eerie, wintery MG read to spark your own Yule celebration? Here are some options:

–The Crowfield Curse, by Pat Walsh (2010). Set in a chilly medieval abbey and its surrounding woods, this tale of goblins, buried secrets, and dark magic is rich with historical details and unsettling mystery—plus, Walsh captures the cold of winter so vividly, you’ll want to read it beneath a thick blanket. Or two.

– Dead Voices, by Katherine Arden (2019). The follow-up to Arden’s popular Small Spaces moves from autumn into wintertime, featuring a snowbound ski lodge and the ghosts that haunt it. Pour yourself some cocoa and dive in.

– The Wolves of Willoughby Chase, by Joan Aiken (1962). The godmother of all gothic MG fiction. An isolated manor in the snowy British countryside? Cruel, conniving servants and mistreated but resourceful children? Packs of howling wolves everywhere? What’s not to love?

– Greenglass House, by Kate Milford (2014). This Edgar Award-winning mystery is a bit like a game of Clue set in a remote inn during a brutal snowstorm, but with richer characters and greater depths.

– Ghosts of Christmas Past, edited by Tim Martin (2018). While not strictly a middle grade book, this collection features short stories by many authors who are well-known to MG and YA audiences (Neil Gaiman, E. Nesbit, Kelly Link, etc.), and has a little something for everyone, from short and darkly funny pieces to classic, truly haunting tales.

Jacqueline West is the author of the NYT-bestselling dark fantasy series The Books of Elsewhere, the MG mystery Digging Up Danger, and the Schneider Family Honor-winning MG fantasy The Collectors and its sequel, A Storm of Wishes. She loves creepy stories, warm fires, and hot coffee, and at this time of year, you can probably find her enjoying all three at once. Visit her at www.jacquelinewest.com.