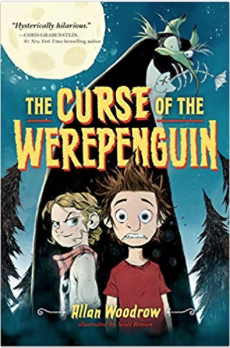 Today, I’m super excited to welcome Allan Woodrow to the blog! Allan is the author of the new MG novel, The Curse of The Werepenguin, with Viking Books for Young Readers. I loved every minute of this hilarious story. I think you will too.

For now, take a moment to get to know more about the author.

Lisa: Tell us about The Curse of The Werepenguin.

Allan: Bolt Wattle is twelve years old and an orphan. He thinks he’ll never have a family. But then he is sent to live with a mysterious Baron in the far-away country of Brugaria. Oddly, the Baron appears to be a 12-year old boy. Even more oddly, and much more terribly, the Baron turns into an evil penguin at midnight. As far as families go, it’s pretty much rock bottom. Bolt is bitten by the Baron and has just three days to figure out a way to break the curse and defeat the Baron, or he’ll become an evil penguin creature forever and join the Baron’s horrible penguin army. Along the way he’s helped by a bandit girl, chased by members of a crazy whale cult, and has to enlist the help of a depressed housekeeper and a cackling fortune teller. As you probably guessed, it’s based on a true story.

Lisa: How did you come up with the idea?

Allan: I’ve always enjoyed old monster movies like Dracula and The Wolfman, and thought it would be fun to twist those in a more comical way. Sure, a half-wolf creature is horrible, but who decided that wolves were the only were-creatures around? What about were-fleas and were-aardvarks? Penguins tend to raise their young and are (mostly) monogamous. Also, they’re funny. They were a great animal to weave into a were-creature horror story with a heartfelt message about the importance of family, in whatever shape and form that family comes in.

Lisa: Do you base your characters on people you know? If yes, spill the beans!

Allan: No, I don’t base my characters on real people. I may borrow someone’s name, but that’s about it. My characters all have a small sliver of me in them though–I tap into my own emotions and experiences as a starting point and go from there.

Lisa: How much of your real-life experiences play a role in the stories you tell?

Allan: When I was a kid my teachers told me to “write about what you know” and I always thought that meant I couldn’t write about astronauts unless I was an astronaut, or did a lot of research about astronauts. And while that’s true, I think that also refers to emotions. You can’t write about love unless you know how to love. When you write about anger, you tap into those times you were angry. So my real-life experiences come into play because of the emotions I felt at those times. Hopefully, I can take those emotions, put them into the heart of a character, and make the scene feel like it could really have happened. I’ve never been a were-penguin, but everyone has felt lonely at one time, or felt like they didn’t belong, or yearned for…something. How can I bottle those feelings and drip them into a character’s head so the audience can understand the confusion, pain, and feelings of an unwanted penguin monster?

Lisa: What books did you like to read when you were a kid? Do those books influence your writing?

Allan: I always tell kids to read what they love to read, whether that’s comic books or graphic novels or penguin horror stories (preferably, penguin horror stories). When I was in elementary school, I was encouraged to read books that were parent-or-teacher approved. I didn’t like a lot of those, and it turned me off reading for many years. I can’t say any book I read as a kid influenced me, other than I don’t want to write books that I wouldn’t have read when I was nine-years old. Sometimes kids tell me that they didn’t like to read until they read one of my books…that’s the most rewarding part of writing children books.

Lisa: What are you working on now?

Lisa: What is your writing process? Are you a plotter or a pantser?

Allan: I love this question, because I ask it all the time and some writers blink and aren’t familiar with the expression. I am 100% a plotter. I write 20-40 page outlines of my books before I sit down. I still sometimes change things, but then I go back to the outline and change that and see what other things need to shift. Only then do I make the change in the manuscript.

Lisa: What advice do you have for aspiring authors?

Allan: Nothing writes itself, and the only way to get better as a writer, is to write. If you really want to be an author, find time to write, every day if you can. It’s easy to make excuses not to write. But serious writers ignore those excuses, even when they really, really want to be doing something else, such as answering blogger questions…Which means, I need to get back to work!

Thanks so much for visiting the Spooky MG, Allan. I hope this wasn’t too scary!

Allan’s Books Include: The Curse of the Werepenguin
The Liberty Falls Elementary Series  Field Tripped   Unschooled   Class DismissedThe Pet WarThe Rotten Adventures of Zachary Ruthless
And many other books, some written under secret names
Coming Summer, 2020: The Revenge of the Werepenguin