Here at spookymiddlegrade.com, our pets play a big role in our writing. I asked a few #SpookyMG authors to share stories about how their pets impact their writing. 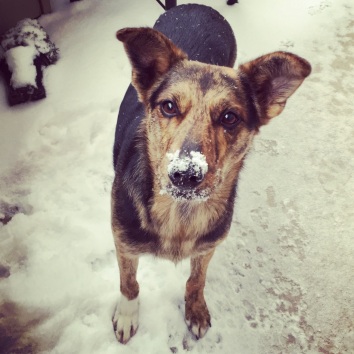 Yes, I had to put my dog first 😛 because she’s just too darn cute and she’s been a huge influence on my writing!!! True story, I wrote Skeleton Tree while sitting in a dog bed, while Hera sat on the couch behind me looking over my shoulder. She was basically my first editor, and she gave up her bed so I could have a comfy seat.

She also inspired me to write a story with a dog best friend, i.e. Bone Hollow, and that book is actually dedicated to her 🙂 She’s totally different from Ollie, though, Gabe’s best friend in Bone Hollow. Ollie has a wiggly, carefree spirit, but Hera is a total ball of nerves. She has a major phobia of people and other dogs. Example: when I first brought her home, I had to carry her outside, and if she saw someone walk past the window of their condo (inside) from 200 yards away, she would race back to our house shaking. It would take her 20-30 tries before she could get up the courage to pee. Now, she’s way braver and more comfortable in her environment, but she’s definitely a one-person dog.

Kim Ventrella is the author of Skeleton Tree (2017) and Bone Hollow (2019), both with Scholastic Press. She’s also a contributor to the New Scary Stories to Tell in the Dark anthology coming in 2020 from Harper Collins. 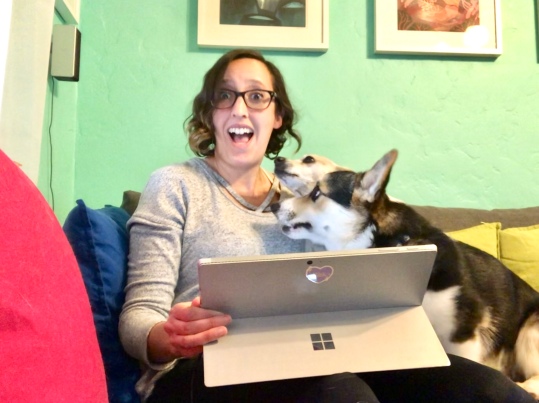 I have two dogs named Boba and Max. Max is a Chihuahua mix about 10 years old, and Boba is a 9 month old corgi puppy.

Max is usually content to lay at my side while I write and it’s nice to have her act as my little personal space heater on cold or rainy days. She’s got really soft ears that I like to pet whenever I’m stuck on a scene and need a moment to think. She’s the “pawfect” writing buddy!

Boba, on the other hand, has a lot of energy and gets jealous of my computer. If I’m not paying attention to him, he lets me know it by crawling onto my lap and getting in the way! He also likes to bark in my face- rude! It can be a bit challenging to get anything done with him around, so I try to take him on a long walk or visit the dog park so that he’ll sleep for a few hours while I work.

Even with the distractions, it’s nice to have pets to keep me company while I write and I wouldn’t have it any other way!

My dog, Parker, is a three-year-old rescue, who we find to be the sweetest dog ever. He’ll usually curl up on the couch next to me when I’m writing. I’ll run ideas by him, and he points out whether or not there are any plot holes. He’s good like that. But mostly, he helps me because whenever I want a break, or am stuck on something, I turn around, pet him, and he basically lets me know that I’m doing okay.

Jonathan Rosen is the author of Night of the Living Cuddle Bunnies and From Sunset till Sunrise. 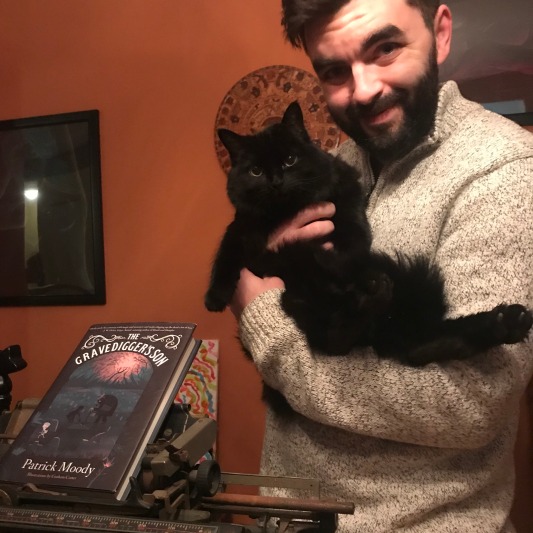 I decided to do a critter photo shoot. As you can see, Wicket the hedgehog is a little shy. He’s often rolled up into a little defensive ball of spikes. And even after two years, our cats still don’t know what to make of him. Nym, our black cat, is a serious cuddle bug (and deceptively hefty). She’s usually stalked around the house by our youngest, Zelda, whose quite the handful. I have a theory she’s part squirrel! She loves her big sister, as you can see by the kiss! These three keep me company when I work from home, never far from my keyboard.

Patrick Moody is the author of The Gravedigger’s Son.

This is Sadie, my newest writing pup (on the right)! With her being so active I’ve had to move to the kitchen area to keep an eye on her while I write. Makes for an interesting word count . . . and sometimes not much! 😁

The photo collage is of our fur babies that have been with us a while. Molly the cat is my true writing feline, though. She insists on sitting in my lap while I write when I’m in my office. And Chloe is the jokester of the group. I have a video of her literally dancing on my desk and laptop while I was listening to music and writing. Super cute! 🐾

S.A. Larsen is the author of Motley Education and Marked Beauty.

This is Mr. Bingley. We’re in constant competition over who gets to claim the desk chair or the top of the desk. Mr. Bingley usually wins. He has also laid claim to my spooky fairytale wallpaper, and he loves to rub against it. This would not be a problem, except it’s a flocked wallpaper, and his yellow fur clings to it like magnets to steel. As a result, a small portion of my daily writing time has to be spent vacuuming my wall.

Jan Eldredge is the author of Evangeline of the Bayou.

This is Kailash. He’s about 5 years old now, and super friendly and like all Labs he still has a lot of puppy in him. In fact, getting him to sit still for this photo took a bit of wrangling.

He’s too big to get up on my desk (thank heavens) but he’ll occasionally try to crawl into my lap as I’m working. Mostly he is a walking companion, and I walk to get ideas so he’s a great help there.

We’ve never not had a dog for more than a couple of months. And at times a guinea pig or two, a rat or two, and a horse. We’d have a cat but our son is very allergic. But we love Kai. He’s got a big heart and loves everyone.

Janet Fox is the author of The Charmed Children of Rookskill Castle. 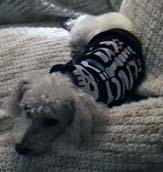 Sadly my dog Holly recently journeyed to dog heaven. She was a constant companion, always ready with ideas and the ability to find perfect napping spots in my office. I can still hear her barks of encouragement, and I know there will be a very special dog in my next spooky story.

Cynthia Reeg is the author of From the Grave (Monster or Die) and Into the Shadowlands.

Here’s a graphic of my editorial “staff” – Hubble, Maggie, Brick, and Stella.  All of them are rescues. I have a two-year-old Lab mix named Hubble (yes, as in the telescope. I am also a space nerd.). He’s a foster fail, btw. I fostered him for the SPCA two summers ago, fully intending to keep him. Maggie (tortie) and Brick (gray) are about 8 1/2, and I got them together when they were just 8 weeks old–also from the SPCA. I picked Maggie out, and then Brick grabbed me from the next cage. They bicker just like the Tennessee William’s characters they’re named for. Stella is the most recent addition. About a year old, give or take, she was living under the porch of the empty house next door. I, of course, was feeding her on my porch–and when the weather turned really, really cold, she got very friendly, and dammit, I took her in. She is a petite sweetie who’s quite happy she adopted me.

More often than not, my guys distract me from writing since I work at home. My previous dog, Bridget, did inspire the dog in Memento Nora! As an animal lover, I tend to give my characters pets. Uncle Ash–in the Ghosts of Ordinary Objects series–has three dogs, all named after beaches in the Carolinas, who follow him everywhere. Plus the third book of the series will feature a ghost dog.

Angie Smibert is the author of Bone’s Gift, Lingering Echoes and other books for young readers.